Truth or Consequences – A Payroll Error

Recently I had an entertaining lunch with a friend that was great fun, but it really brought up some important, and serious, issues. When a paycheck goes terribly wrong, what happens? Payroll errors can have long-lasting repercussions.

Let me tell you a c 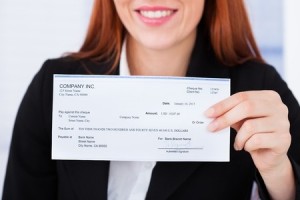 My lunch mate’s sister, Jenny, is a new graduate, and yes, a Millennial. She had just taken her first, as she put it, “real, grown-up job.” Things were going great. In fact, her workplace performance was so great that she had gotten a B-I-G raise before even getting her first paycheck. And, her boss had said nothing. It was such a surprise, but there it was in black and white.

Jenny’s pay rate was originally agreed upon to be $690 per week. She expected that first check to be $1,380. But when she opened up the deposit notice and check stub, there it was – gross pay of $1,920! Almost $300 more per week! She wasn’t sure about all the deductions that were taken, but the end result was that she had gotten an almost 40% increase! Life was great!

Being the older sister, my friend listened to her whoops and exclamations before asking the glee-crushing, soul-withering question: Are you sure?

“Why, of course, the check was right there,” replied Jenny. “How could you possibly question it? The money has been deposited right there into my checking account.”

My friend wasn’t questioning the check – she was asking about the accuracy of the check. But Jenny liked the story that she was making real career inroads and was being noticed by her employer rather than there being a mistake on her payroll check. Their call ended with a “you’re just jealous of my good news!” and then silence. The call was gone.

How to handle payroll errors – or questions

Mistakes happen, and when they do, the best course of action is to point it out or at least question it. The rate may indeed have been increased, but maybe it was a payroll error. If it is discovered later, and it will be, Jenny would probably be asked to repay the excess amount.

And, if you think about it from both sides of the paycheck, not saying anything would be like saying, “I’m not sure this is mine, but I will take it and hope no one ever finds out or says anything.” Is that a statement you want your employer to think about you? Especially when the whole thing could be a simple payroll error?

Plus, if Jenny says nothing and it is a mistake, it could be carried on for months and she could end up with a request for thousands of dollars in repayment.

In an instance like this, neither ignorance, nor avoidance, is bliss. Everything seems to come around to right the ship eventually. The cost can be more than financial, too.

At the lunch when she shared Jenny’s story, we just shook our heads. We knew what was probably going to happen. When we met a couple of weeks later, Jenny’s story continued.

Even though Jenny had been encouraged to bring up the issue with her employer, she did not. So, you can guess what the smirk on my friend’s face meant. Jenny might have been doing a good job, but she did not get the big raise she was so proud of getting. It was a mistake – instead of a rate of $690, the HR clerk had transposed the numbers and paid her at the rate of $960 per week. Oops.

Instead of a request for a check in repayment, Jenny’s employer called her in and explained what happened, then said her next check would be adjusted for the overpayment on the previous check.

While it’s possible that her rate could have been increased, it would have been a prudent step to inquire, especially since it was her first check. Jenny was embarrassed and then felt guilty that she just “took the money.” She tightened her belt to make it through the reduced paycheck, but now she is looking for a new job. Her guilt and embarrassment has put a strain on the relationship with her boss.

Payroll – and its consequences – are significant and serious

One thing we understand here at The Payroll Department is how important a paycheck is and what every payroll we process means.

Standards for the accuracy of the payroll, the accuracy and complete payment and reporting of payroll taxes, and the efficient and timely processing are all set at high bars here at The Payroll Department. We understand the underlying significance of each and every paycheck we process. We take the responsibility and privilege of processing payroll for each of our small business owners very seriously.

That’s why, at The Payroll Department, we have processes and systems in place to prevent mistakes. If something looks out of the ordinary or unusual, we question it. We want to be proactive because we don’t want anyone to have the Jenny experience – or her boss’s or the HR clerk’s experience, either.

Outsourcing your payroll to a payroll processor adds another layer of checks and balances to reduce the potential for payroll or payroll tax errors. Handing over the responsibility of payroll can be scary for many small business owners. But when you hand it over to professionals, you might just be surprised at how quickly the worry and concern dissipates – and gets replaced with confidence in a job done right!