Home → Blog → Oops! Is NOT What You Want to Hear When Dealing with Payroll

Oops! Is NOT What You Want to Hear When Dealing with Payroll

“Oh, it was just an honest mistake!” How many times have you heard (or said) that phrase? It is often used to describe a small error that was done with no malice or ill will and even conveys a sense that there was no real harm done. And sometimes that is true. But sometimes even what seems like a small mistake or an error that was not made due to recklessness or spite can have far-reaching consequences, especially when it has to do with payroll. 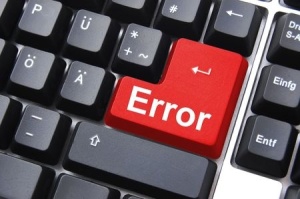 Take as a real-life example the recent mistake made by the Plymouth Public School system in Boston, MA, as detailed in a December 26th article on Boston.com. Reportedly, a mistake was made by the school system and the amount of pay that was supposed to be deposited via direct deposit was instead withdrawn from employees’ accounts. Can you imagine the ripple effects of this error? These employees were undoubtedly counting on this direct deposit arriving on time as they should. Instead they found money unexpectedly gone from their accounts.

The effects of this are obvious. When an error like this occurs, employees are affected in a very real way. They have their own financial obligations, which must wait until the problem is resolved. In this case, the error was found on a Friday and some banks agreed to resolve the situation the day that the error was found, but other banks that were involved were not able to reverse the transaction until the next business day, which wasn’t until Monday. Needless to say, even when the error is caught and corrected quickly, there is still the potential for damage, or inconvenience at the very least.

And then there is also the task of cleaning up this mess. The administration had the unpleasant task of notifying their employees as well as the daunting assignment of contacting the banks that had been involved and ensuring that all accounts were appropriately restored.

If you are thinking that you would hate to deal with that kind of a headache, you are not alone. Lots of small business owners know how easy it is to make one little mistake that can affect so many people. Often they choose to delegate their company’s payroll responsibilities to a reputable payroll company like The Payroll Department. Many small businesses recognize that a payroll services company, whose singular focus is on payroll administration, can do a much better job at making sure that all aspects of a payroll operation are completed promptly and correctly. When you are ready to eliminate the headaches and potential pitfalls of doing your own payroll, call Teresa Ray at 317-852-2568 for more information about how The Payroll Department can help!